So…that offworld secret garden life was..well.. not for me.... 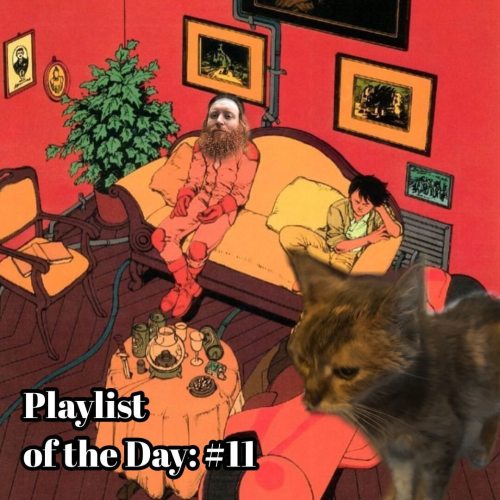 So…that offworld secret garden life was..well.. not for me. Turned out the old couple were replicants too, so, though it was more difficult than I’d hoped, I didn’t feel too bad about escaping.

After that it was pretty easy to get to the spaceport and secure a crew spot on an ice hauler headed into some moon or other. Little did we know just a slight detour to rendezvous with a gambling barge would cause an unintended trip through an ancient (and previously undiscovered) inter-dimensional gateway.

Blah, blah, blah, long story short I wound up here, and as I always say, “when in Neo-Tokyo, join the Capsules” What is good for health is often bad for education.

This is a photo from the other night. I don’t know how GIANT cat got here, but my motorcycle seems to be soothing her right now so I’m not tryna to push it and just accepting that I’m safe (for now). I know they say a picture is worth a thousand words, but like it’s worth like 3 sounds (at best). That’s said, can you guess what’s playing on the audio crystal rn?

Seems to me Graeme Smith over there had some pretty awesome things to say about Bad Ghost as well. Something to the effect of:

“I was captured by Bad Ghost‘s unconventional construction. On a bed of traditional folk and acoustic instrumentals lay an unexpected array of electronic effects. What really stuck with me though was E.W.’s soulful vocals and poetic lyrics.”

You can read more here:

Anyway, I’m not sure how long I’ll be here BUT that doesn’t mean you can’t enjoy the scene fully. Pour yourself a beer, pop some electrical arcs for that ozone fresh scent, or skip all that just spin the playlist at #linkinbio https://linktr.ee/ewharrismusic OR https://open.spotify.com/playlist/7FmFrCpqt49OeU5cQjTDpC?si=2TgZ6sK_SC6QJAC1qPgkWQ&dl_branch=1 (at Brooklyn, New York)
https://www.instagram.com/p/CRokNWHD9Kl/?utm_medium=tumblr