Of all the pyramids on all the planets in all the... 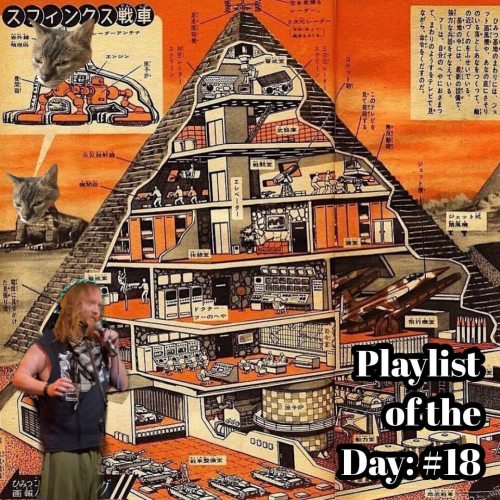 So there I was on a military installation on a desolate world that appears (linguistically at least) to correspond to a interstellar imperial period in Japanese history that in my travels through time (and lazy attitude toward “current affairs”) I had…well…missed.

Fortunately, being as I am an entertainer and standing militaries without clear adversaries are typically plagued with boredom, I was pretty confident I could get work (and by extension avoid death) somewhere on this oddly Egyptian themed base.

Unfortunately all the music jobs were spoken for by mixed media PhotoJazz outfits doing ancient standard mashups like “Hit Me Baby Got Back In Black Is the Color of My True Love’s Hair” ….

This left me no recourse but to pivot to standup…thing is, most jokes are at least kinda topical. I figured I’d start with the classics like:

In the end (to avoid the white laser hook) I had to resort to my secret weapon…wackiness.

Basically I projected (with the assistance of a sympathetic engineer who I think had a crush on me) an image of GIANT cat’s head onto a Sphinx shaped pumping station and cartoonishly mimed blunt trauma (falling down, being punched, kicked, etc.) and shouting ridiculously during each impact, all the while playing @unxigned ‘s Playlist:

To be honest it was exhausting, but I’m alive still AND I learned a valuable lesson. People, human and non, are complex. They all have their little rules and peccadilloes and navigating those is hard. Absurdity though, seems to be pretty consistent in living things and is very easy to divine, and maybe THAT is the first step toward true communication.